This history gives a look at enslavement in St Charles Parish, Louisiana during several different historical periods as ascertained from local historical and legal records. The first Africans brought to Louisiana were part of a desperate effort by the French Crown to introduce enough population into the new colony to keep it from failing. We know a large percentage of African people arriving in French Louisiana from 1720 to 1740 came from the area between the Gambia and Senegal rivers. The Bambara and the Mandingo were the two major tribes living in this area. Many were skilled workers in agriculture and manufacturing of dye and cloth. Also, among them were doctors and nurses, carpenters, potters, leather workers and builders.

On arrival at La Balize at the mouth of the Mississippi River, the captives were introduced to their new status as enslaved colonist. St. Charles Parish residents receiving Africans were mainly people who had no supervisory positions, this prompted the 1724 Edict of Louis XV called the Code Noir or Black code. This edict regularized the legal status and treatment of the black colonists arriving in Louisiana.

Early records from St. Charles parish show enslaved Africans living and working in very small groups. Africans built their own shelter. Their houses had dirt floors and were arranged into groups called camps. The relationship between the enslaved and those who owned them seemed to vary greatly. French and German families in the parish, who owned relatively few slaves, seemed to be the most likely to free them. Plantations with a larger number of slaves rarely mentioned the freeing of a slave. On large plantations, slaves were most likely to be harshly punished. The Code Noir stated slaves could be put in chains or shackles for punishment or beaten with a rope or switch.

The French government took very seriously its duty to bring enslaved blacks to Catholicism. Sunday was a day off. A slave could work on Sunday only with his master’s consent and must be paid for Sunday work. Some enslaved couples married within the church but most did not. Since the Code Noir forbade the separation of husband from wife, the owners discouraged church marriages as it limited the opportunities for a sale of a slave. 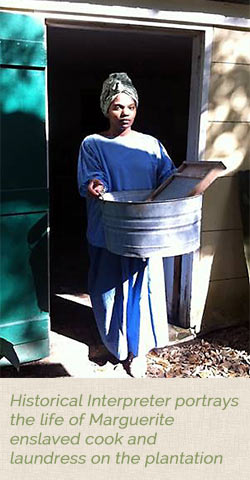 In the mid-1760s the change from French to Spanish rule began in St. Charles Parish. The Spanish government opened the Louisiana colony to slave traders, and ships packed with ill-treated human merchandise began to arrive at the Port of New Orleans. Robin Delogny, the first owner of Destrehan Plantation, bought land in the parish in 1783 to build a house and at the same time acquired 10 enslaved men, and women and two children, who currently lived on the land. One of them was Marguerite, a skilled cook and laundress, who came with her two children Charlo and Noel.

You can learn more about the life of Marguerite and her children by taking a tour of the plantation with one of our historical interpreters.

After 1804, the sale of Louisiana to the United States of America brought changes to slavery in St. Charles Parish. Changes in the Code Noir as Louisiana adjusted to American rule brought more restrictions to the enslaved. The introduction of sugar farming meant new residents such as Jean Noel Destrehan needed a larger labor force. Fifty-nine slaves sufficed for indigo at Destrehan Plantation under Robin DeLogny, but Destrehan needed 100 for the growing and processing of sugar cane on the same land. There was no legal recognition of marriages between slaves in American Louisiana. Slaves, among themselves, set up family groups and lived as man and wife with or without the formality of marriage being allowed them by the master.

Like most French Creole plantations in St. Charles Parish, Destrehan operated under the Creole system of management. Evolved from the Code Noir, slaves worked from sunrise until 3:00 p.m. in the afternoon with the exception of harvest time, which was the most labor intensive time for the enslaved. Slave workers on the plantation were divided into “gangs” or work groups according to strength and ability. The prime gang was about 20 of the strongest and most intelligent men on the plantation. The hoe gang consisted of both sexes, and women nursing children were placed in the suckler’s gang, which always worked nearest the quarters. The trash gangs were children 10 years of age or older who picked peas, gathered corn, raked hay or fodder, or performed other light tasks under the supervision of two or three elderly people.

Our records indicate over 200 slaves were on the plantation before it was seized by the Union during the Civil War. In 1863, the Emancipation Proclamation freed those persons who were enslaved in areas controlled by the Confederate States of America, but New Orleans and the nearby river parishes were an exception since they were under Union control.

The 13th Amendment passed by congress on January 31, 1865, and ratified by the states on December 6, 1865, formally abolished slavery and involuntary servitude in the United States.

This video of our slave cabin was done by the National Park Service as part of their project to capture the remaining slave cabins in the United States.