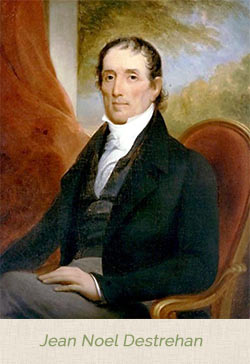 In 1803 the transfer of Louisiana from Spain to France to the United States saw Jean Noel Destrehan's entry into politics. French Ambassador Laussat chose Etienne DeBore for Mayor of New Orleans and Jean Noel Destrehan for First Deputy. Jean Noel's entry into politic meant he would spend more time in New Orleans. He purchased a house in New Orleans on the southeast corner of Conti and Chartres. In 1804, the Congress of the United States created a territorial government with no mention of statehood. Jean Noel stepped forward to insist the cession treaty promised immediate statehood. Jean Noel was one of three men selected to travel to Washington to meet with Congress asking for the promised rights of the territory. In 1805, the country of the German Coast elected Jean Noel to represent them in the new territorial House of Representatives. The House met for the first time and elected Jean Noel speaker and nominated him for the Legislative Council. Washington D.C. received the names of the nominees, and President Thomas Jefferson chose four men from the list, Destrehan, Joseph Bellechasse, John Mccarty and Pierre Sauve, to comprise the actual council. You can view the original document of appointment signed by President Thomas Jefferson and Secretary of State James Madison in our Jefferson Room. The job of the council decided how the territorial state of Louisiana would be organized and to write the state laws. The Council preserved the system of civil law, rather than using the common law system, and reverted to the former divisions of parishes abandoning the artificial division of large counties. Jean Noel Destrehan served in the State Legislature and ran for Governor losing to Louisiana’s first Governor William Claiborne, He ran for the first United States Senate seat and won serving in the senate until 1817.