The Rost Years – Remodeling, War and the Reconstruction Era 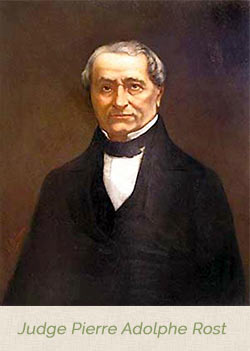 After Henderson’s death, Louise Odele Destrehan’s husband, Pierre Rost, bought his wife’s childhood home of Destrehan Plantation in 1839. It stood unoccupied since 1836 when Rene Destrehan, Louise’s brother, died and was in need of renovation. Louise Odele and Pierre Rost restyled the plantation home in 1840 to the then-popular Greek Revival style. In 1845 Rost became Judge Rost when he was seated on the Louisiana Supreme Court. He purchased a house in New Orleans at Mandeville and Decatur Street, an area now under the Mississippi River Levee. Judge Rost was also an agricultural reformer and made Destrehan the largest producer of sugar in St. Charles Parish with the most modern equipment. Destrehan Plantation became the summer home for most of the extended Destrehan Family. In 1848, Nicholas Noel died, and his will forbade his son Azby from returning to Louisiana until he was twenty-one. Adele, Nicholas Noel’s second daughter, would later marry a neighbor, Samuel McCutchon who owned Ormond plantation. 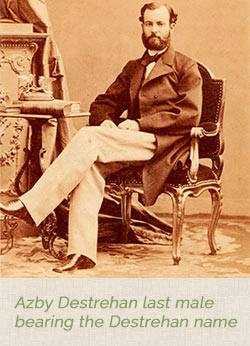 The onset of the American Civil War in 1861 ended the profitable antebellum sugar trade. Rost took his entire family including his nephew Azby Destrehan to France. In 1861, Azby married Rosa Ferrier and died in 1862 from small pox. He would be the last male bearing the Destrehan name. When Jefferson Davis, President of the Confederacy, heard Rost was going to France, he asked if Rost would present the Southern cause to the leaders of France. This request came to haunt Judge Rost after the war when he tried to affirm his loyalty to the United States of America. The year after the family left Louisiana, the U.S. Government confiscated all of Rost’s property in Louisiana in spite of his statement he was a loyal citizen. Felix Larue, who stayed behind to manage the family finance, hired lawyers to contest the seizure. In 1865, Rost received a pardon and his property was restored to him. In 1865, the government established a Home Colony, run by the new Freeman’s Bureau. By 1866, 700 newly freed slaves were housed at Destrehan, in the slave quarters, in temporary housing and in the main house, itself. In 1867, the home colony was disbanded and the plantation returned to Rost. Judge Rost and Felix Larue operated the plantation in 1868 but the family continued to live in New Orleans. Judge Pierre Rost died in 1868 and a family agreement allowed his son Emile to purchase the plantation instead of being put up for auction. Louise continued to live in the New Orleans house until her death in 1877.

Emile Rost, the son of Louise Destrehan and Pierre Rost graduated from Harvard Law School in the 1850’s and then studied Louisiana Law at the University of Louisiana Law School. In 1886, he served in the prestigious position of District Judge for the River Parishes. Emile never married, and in 1910 he sold the house and property to the Destrehan Manufacturing Company. In 1914, the plantation became the property of the Mexican Oil Company and later Amoco. They built an oil refinery and company town on the site. In 1958, the out of date refinery was torn down and the house stood vacant and was repeatedly vandalized due to a legend that Jean Laffite hid treasure on the property.