The Next Generation – Society and Wealth 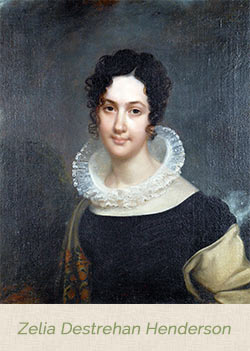 On October 4, 1823, Jean Noel passed away leaving one of the largest estates in Louisiana at that time to his surviving children Nicolas, Rene’, Eleonore Zelia, Louise Odile and Celeste. The plantation home was jointly purchased by his daughter Eleonore Zelia and her husband Stephen Henderson and Jean Noel’s youngest son Rene. Zelia Henderson’s husband, Stephen Henderson operated the plantation while living in New Orleans. In August of 1830, Zelia attended her sister’s Louise’s marriage to Judge Rost before traveling to New York. On September 19th in New York, Zelia passed away due to an unexplained illness. Henderson immediately brought her body home for burial. Rene continued to live at the plantation until his death in 1836. He left his half of the plantation to Celeste and Louise. They sold their quarter interests to Henderson, who was the sole owner until his death in 1837.